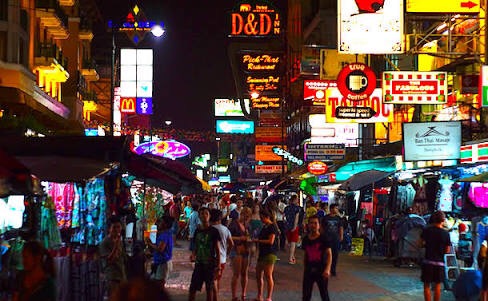 “That’s so sad,” I said, commenting on the two Indians dancing beside each other but at separate tables. The guy’s girlfriend had gone to the bathroom and he’d taken it as an opportunity to finally get his rage on. His girlfriend had shut him down in his previous attempts to dance, staring at him as if he was wearing underwear on his head. Although would make him Quailman? That would be awesome!

“I wish that they could just dance together.” I took a sip of my Long Island. BLEH! It tasted like coke. I went up to the bar and asked if I could trade it for 1 without coke. They let me keep both.

I walked over to the Indian girl and asked if she wanted my cokey Long Island. She accepted and we started chatting so I invited her over to our table. She seemed excited. She was traveling on her own for 2 weeks and said that it was much tougher to meet people than she’d anticipated. Until tonight. And it was her last night so she was ready to have a good time.

I refocused my attention to the man singing and playing acoustic. We all started singing along to that Iz song. I rarely sing along to anything but I was in an easygoing mood that night and was going to enjoy myself regardless of what that entailed. I’d spent 30 hours in silence traveling to Bangkok and then the whole day in Bangkok exploring on my own. I was just happy to have people to talk to.

After the man’s standing ovation which of course we initiated, it was time to go to the ping pong show. Approaching a guy making that stupid popping noise on Khao San road and having the sketchy bastard rip us off for the price of transportation wasn’t my style. Instead, I asked the bartender to write down the name of a ping pong show in Thai. He was hesitant. I think ping pong shows might be frowned upon. Oh well. The 5 of us piled in a Tuktuk.

The place resembled a seedy strip club. A chubby girl standing naked in front of us was preparing for her act. I’m not into girls but I still wished she was hotter. She had a man’s face. But she was clearly not a man.

A ping pong ball shot out of her vag. So gross! She placed a cup on the ground and began aiming the balls at the cup. Miss. Another girl placed the poorly aimed (too harsh considering she’d shot it from her vag?) ball into the cup. She missed again and again. Oh that catcher. My heart goes out to her.

“Is this supposed to be hot?” I asked. I was asking the wrong crowd. I was with 3 girls and a gay guy. We all agreed that it was NOT HOT. An old lady began stripping and we decided that it was our time to go.

One thought on “Oh No, a Ping Pong Show”

What's on your mind? Cancel reply

INTEGRITY & HONESTY. RELIABILITY & TRUSTWORTHY. TEAMWORK. PROFESSIONALISM. RESPECT DIVERSITY. These core values have been co-created by & through all Indochina Voyages team members and inspired by our common goals. These values play as the backbone of Indochina Voyages spirit and practice and we will keep them live every day.

World and Wilderness
Fresh Off The Plane

My Girls On Tour - UK Fashion Blog
The Boys I Encounter
Say Cheese!

"Everybody does it, it's just that nobody talks about it."

|ar-e/ e-sk| verb. in the style of or resembling Ari

Maybe it works in different ways.. Maybe we see what we see but not listen to what we see. My life, my eyes, my mind, me. All me.

Pass It Down Or It Gets Passed Up

Updates from a guy who is visiting every country in the world.

Discover the world one journey at a time